What Is Temporary Fencing?

What Is Temporary Fencing?

Looking For Temporary Fencing In Melbourne?

Have you ever wondered what temporary fencing is? Most likely, you have seen one when passing by a big construction site, sporting event or when having a dance at a music festival. Still cannot recall seeing temporary fencing? Then keep on reading as today we will answer the question: what is temporary fencing?

Just as the name suggests, temporary fencing is a fencing type that is made of free-standing self-supporting fence panels. The panels are interlocked with each other by couplers. The benefit of having free-standing and self-supporting fence panels is that they are very flexible and easily portable, making it easier and quicker to transport and adjust them just as needed.

Temporary fencing for the sporting events that Melbourne takes such pride in, can be set up in a matter of weeks and then taken down sometimes even in days. All to discover that Melbourne Park or Albert Park have transformed into their usual appearance like nothing major had happened just a few days ago.

We also cannot leave unmentioned the beloved sports by Victorians, AFL. Temporary fencing is often used for crowd control and safety measures on the game days.

In summary, temporary fencing is used during large events or for public restrictions. A temporary fence helps with public safety and security, crowd control, storage, and is sometimes installed for theft deterrence. Quite often, you can also see temporary fencing in the parking lots, disaster relief or emergency areas.

Why is temporary fencing so popular? Firstly, because it does serve a purpose, just as mentioned above. Secondly, it’s very flexible and much more affordable than permanent fencing that in many cases cannot even be installed in the desired location. An easy example would be the Melbourne Formula 1 Grand Prix. Temporary fencing is useful during the event for crowd control and safety measures. However, not many would be happy to see fencing during the rest of the year at their favourite running spots in Albert Park.

Now, we have talked about metal (steel) temporary fencing, meaning temporary fencing that is made out of panels with a metal frame and having a chain link or mesh in the middle. Is there an alternative to a temporary metal fencing? Yes, there is.

Plastic temporary fencing is used quite often. Just as temporary metal fencing, temporary plastic fencing is portable, easy to configure and removed when needed. Which one you should choose? It depends on your fencing requirements. A temporary steel fence might be a better choice for high-security fencing. However, temporary plastic fencing can be installed when a wider (thicker) fencing solution is needed (eg. on the roundabouts). Therefore, the best choice would be to contact a trusted fencing company and talk to the fencing experts who can determine the best temporary fencing solution for you.

Diamond Fence can help you out with temporary fencing requirements.

Diamond Fence is one of the trusted fencing companies in Melbourne. Therefore, don’t hesitate and contact us today! Call us on (03) 9753 4566, shoot us an email on info@diamondfence.com.au or get a FREE online quote. 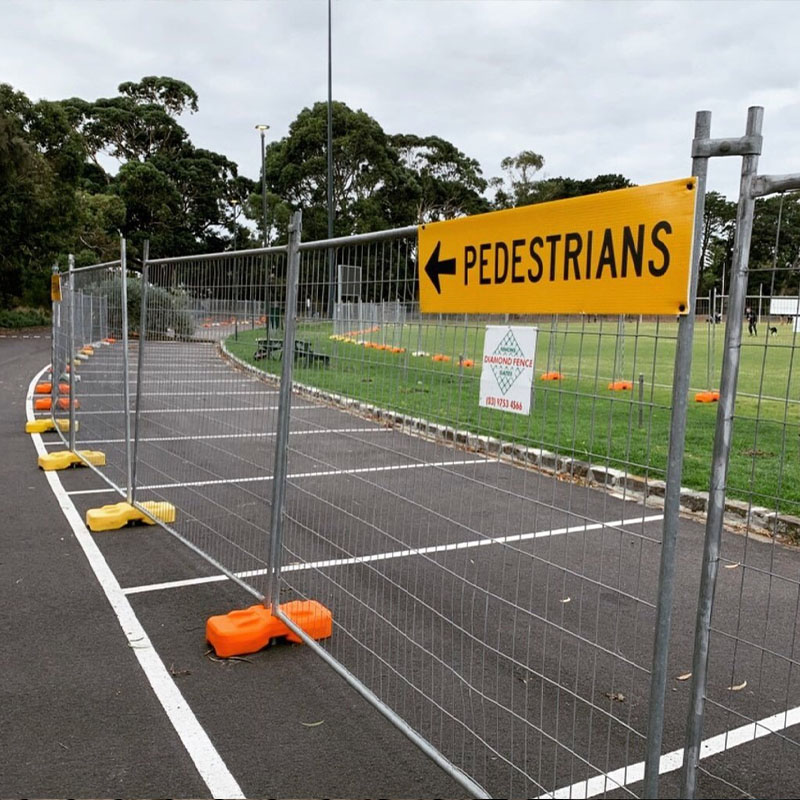